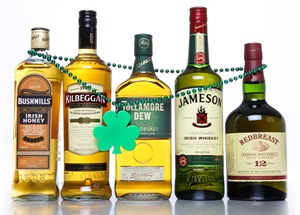 Well let’s see… They have a wicked sense of humour.  Then there’s their gift of the gab and story-telling (I personally wouldn’t know anyone like that.. wink wink). How they love their potatoes (t’is true).  They are very gifted musically (U2, Van Morrison and every Irish person who has jammed in a kitchen).  They have charm up the wazoo and they know how to brew a beer and make mighty fine whiskey.

Irish Whiskey has never really received the respect that it deserves, but that is starting to change and it is about time.  Each of the three below are quite different from each other.  Start with one and work your way through.

Smithwick’s Ale is from Kilkenny and is a grand Irish Ale.  The Innis & Gunn Kith & Kin was born in Scotland and is wrapped in a cozy Irish blanket (aged in Teeling Irish Whiskey barrels).  It is a limited edition so it won’t be around forever. Sláinte (slawn-cha)

Cool Weather Calls for a Change in Drinks

What is Irish Whiskey All About?