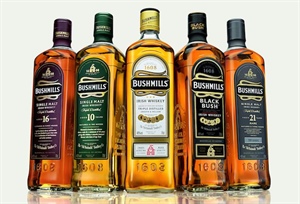 So first thing out of the gate… Irish Whiskey (yes with an ‘e’) can only be called Irish Whiskey if it is made in Ireland and is cask-aged for a minimum of 3 years.  However, most producers age their Irish Whiskey for at least 2 to 3 times that requirement.

The Irish also use a copper pot still and they distill their delicious drops of dew 3 times (with a few exceptions, the Scots distill theirs twice).  This third distillation softens the whiskey a wee bit, but it keeps all of the fabulous complex flavours for which Irish Whiskey is known.

Irish Whiskey is not peated, for the most part.  There are a few ‘peated’ ones in the market now, but we suspect that number will stay quite low.

To your health, or as the Irish would say Sláinte (pronounced Slon-cha)

Some of the Irish Whiskey brands and prices you can find at Leduc Co-Op Liquor:

Cool Weather Calls for a Change in Drinks

What Are the Irish Known For?